Plus 6 Tips For Photographing a Celebrity Event

Played Poker with  楊係 Jerry Yang
A few weeks ago I had the unique opportunity to photograph a celebrity poker tournament.  While there I meet World Series of Poker Main Event winner and celebrity Jerry Yang and photograph him at a celebrity poker tournament.  Jerry was a super nice guy, very amiable and always had a smile and a warm handshake with everyone he met.  He was also promoting his new book All In, which, in case you’re wondering, has sold more than 1,000,000 copies.  He might end up making more on the book deal than in poker this year?! 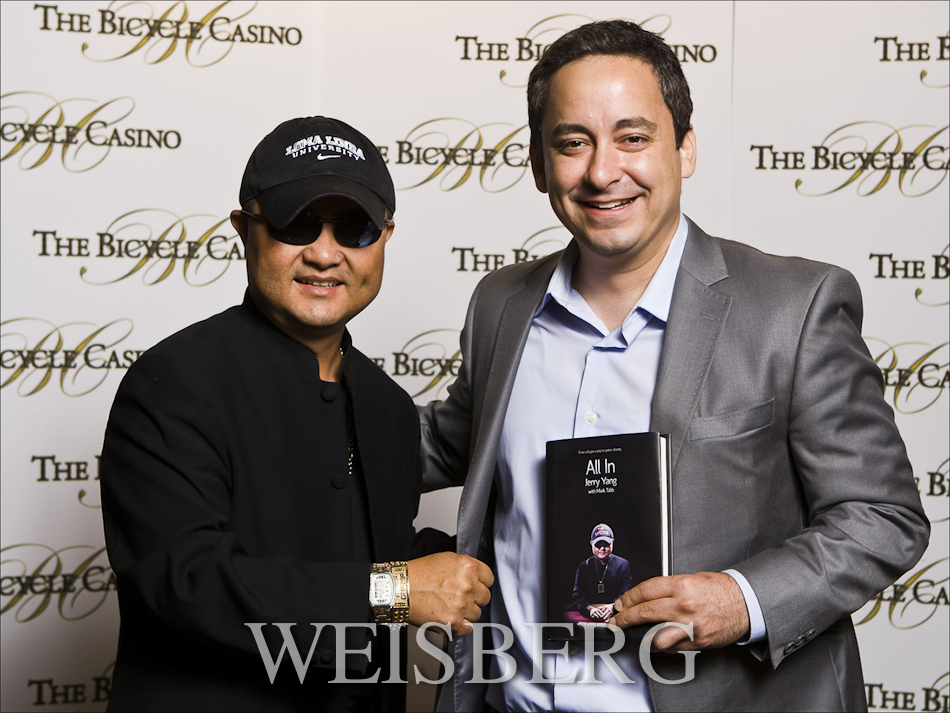 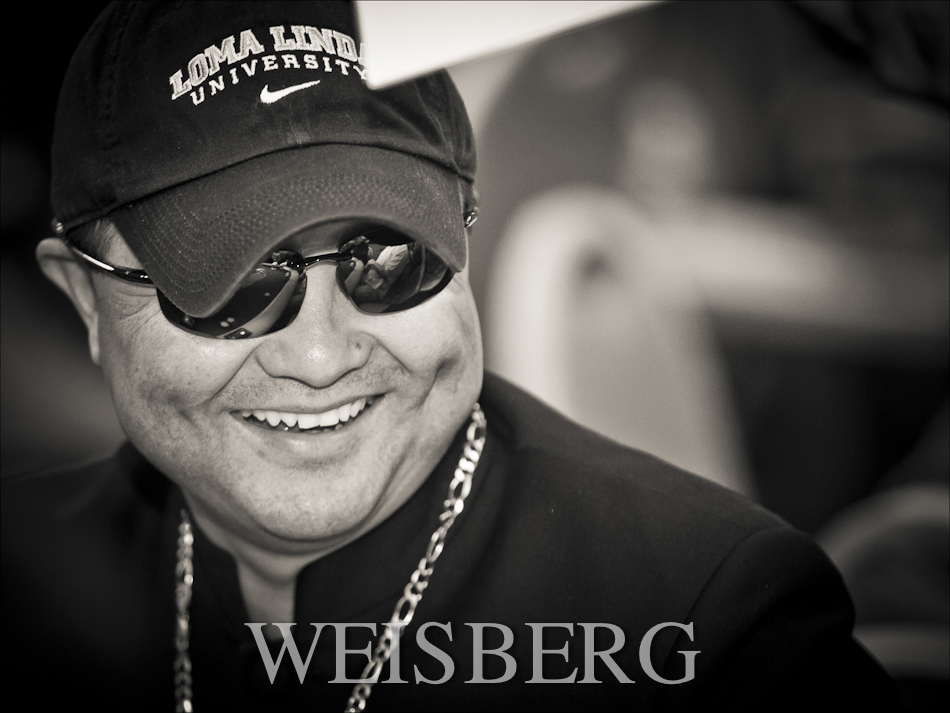 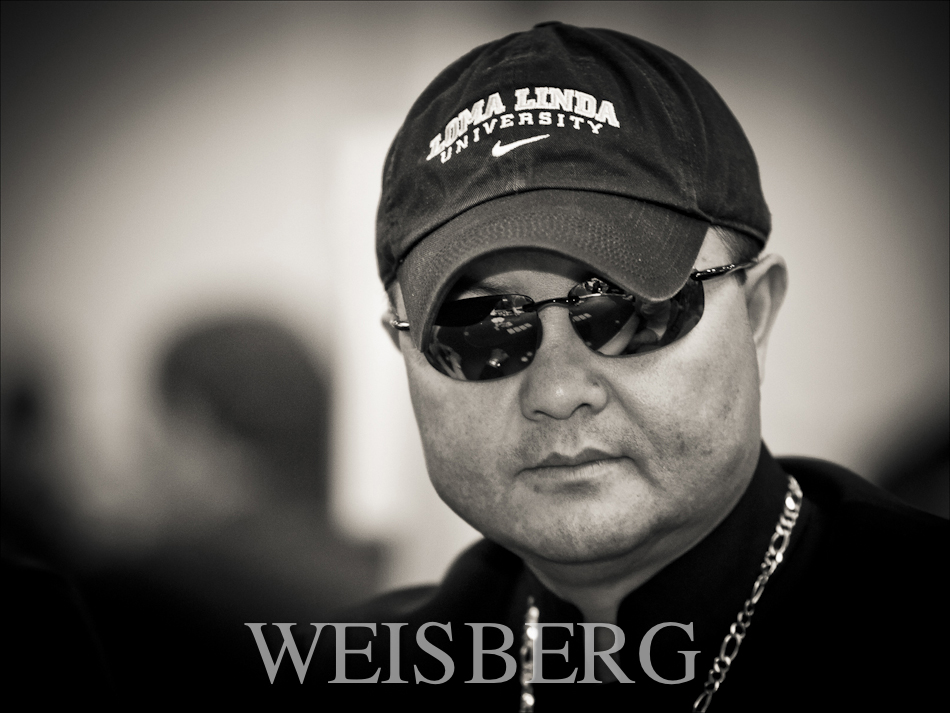 Went a Few Rounds with Apollo Creed
One of the highlights of photographing the celebrity poker tournament was meeting, Carl Weathers who played Rocky’s nemesis and Undisputed Heavyweight Champion of the World, Apollo Creed.   Carl is super down to earth, has a deep raspy voice, dressed sharply even though it was a casual event, had a sparkle in his eyes, dimples and a great sense of humor. 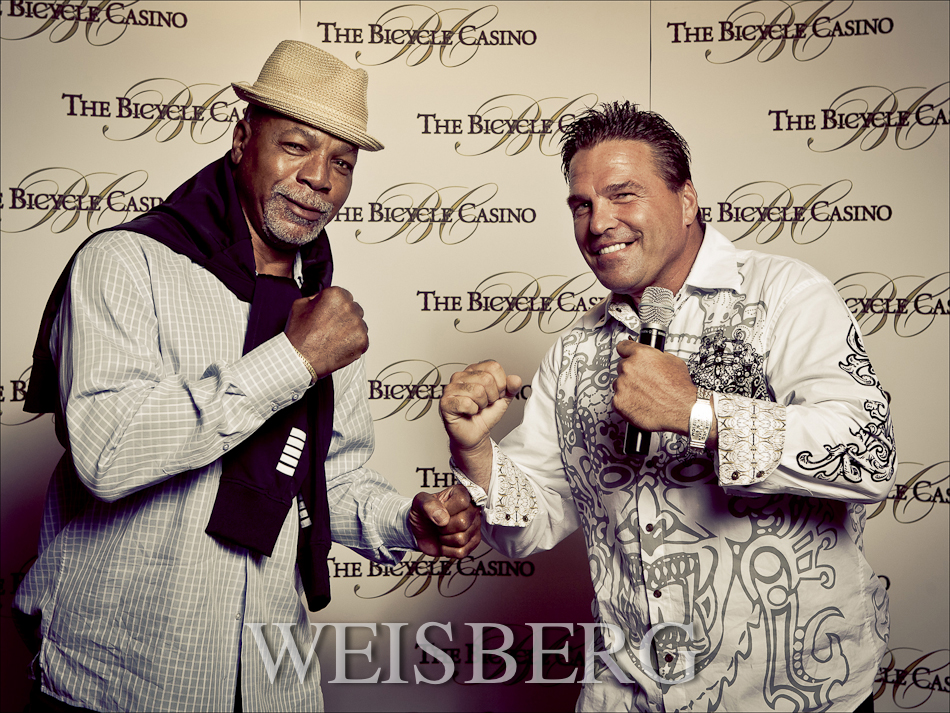 You never know who’s going to show up at an event like this.  So while it was mandatory to do some “red carpet shots,”  afterward I  had carte blanche to shoot celebs  P.J. style throughout the tournament. 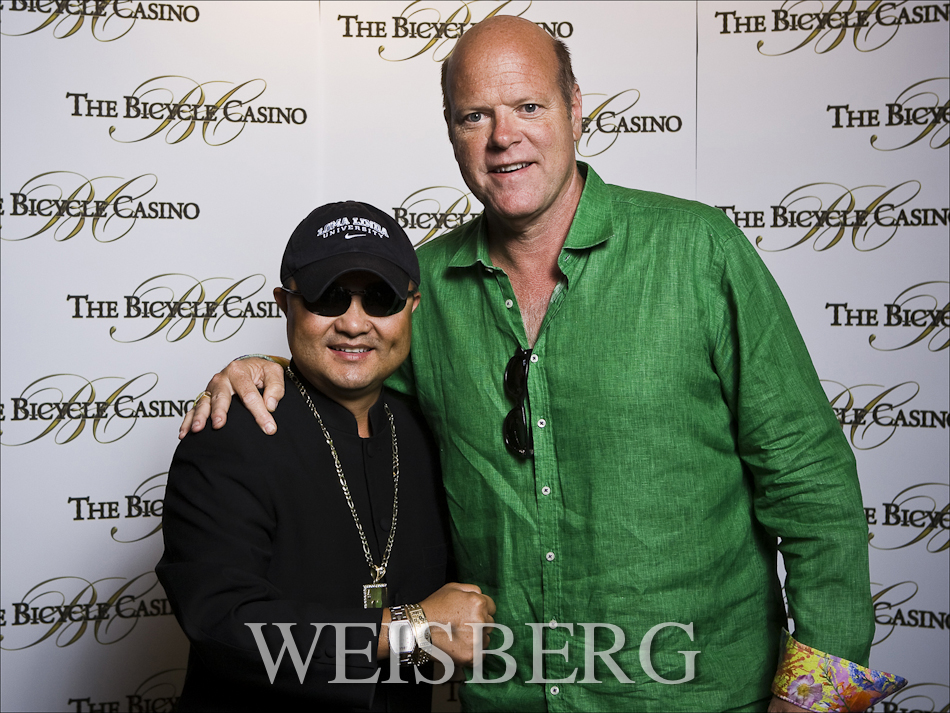 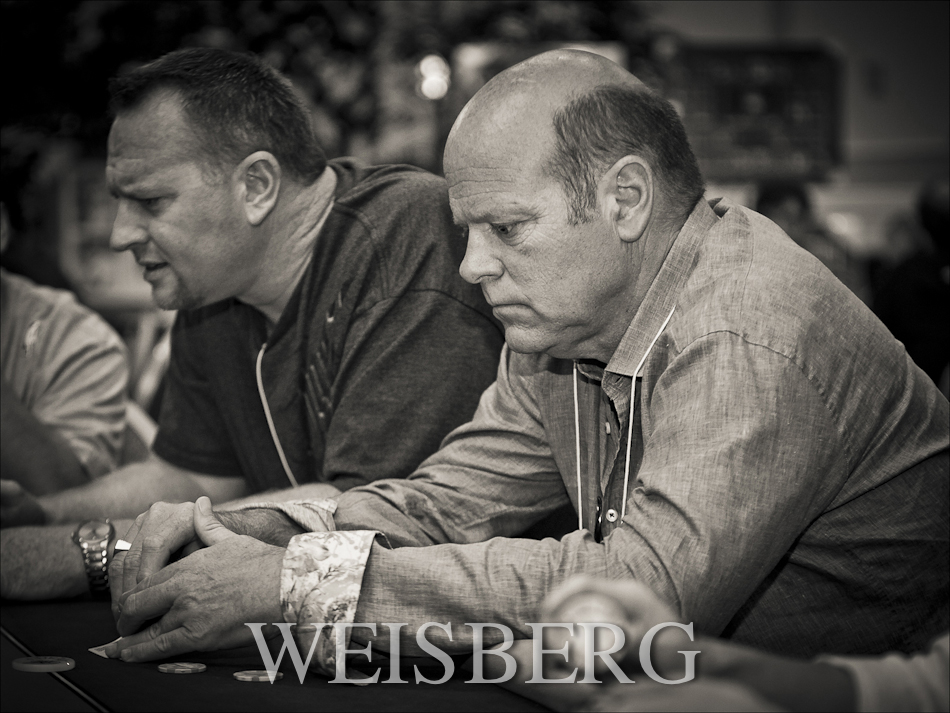 The guy to the left of Rex clearly has a poor hand and he looks like he’s in pain. Rex didn’t really have a tell. 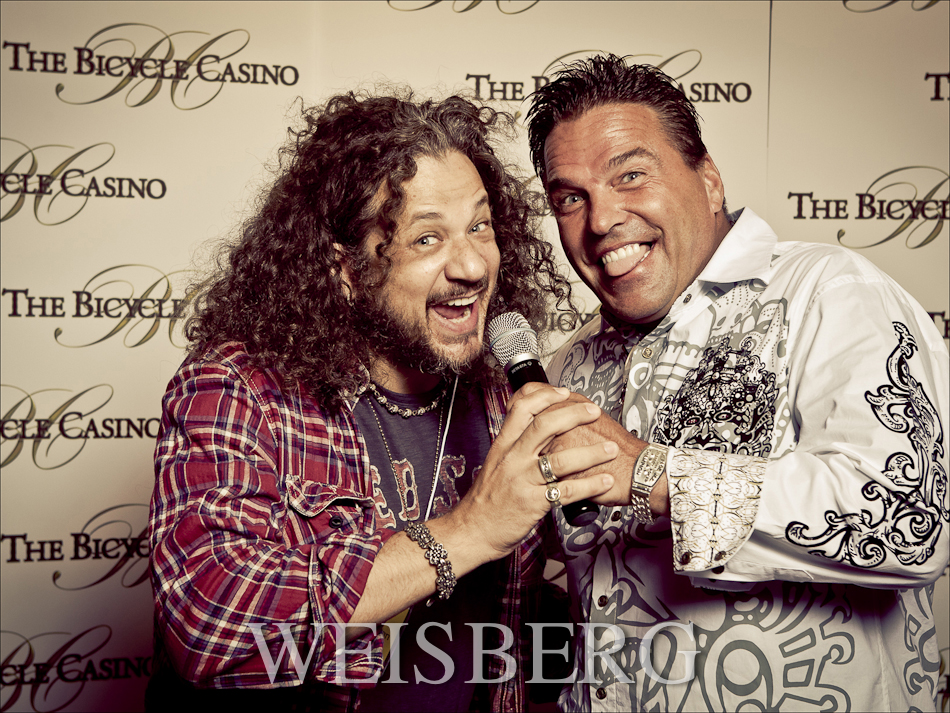 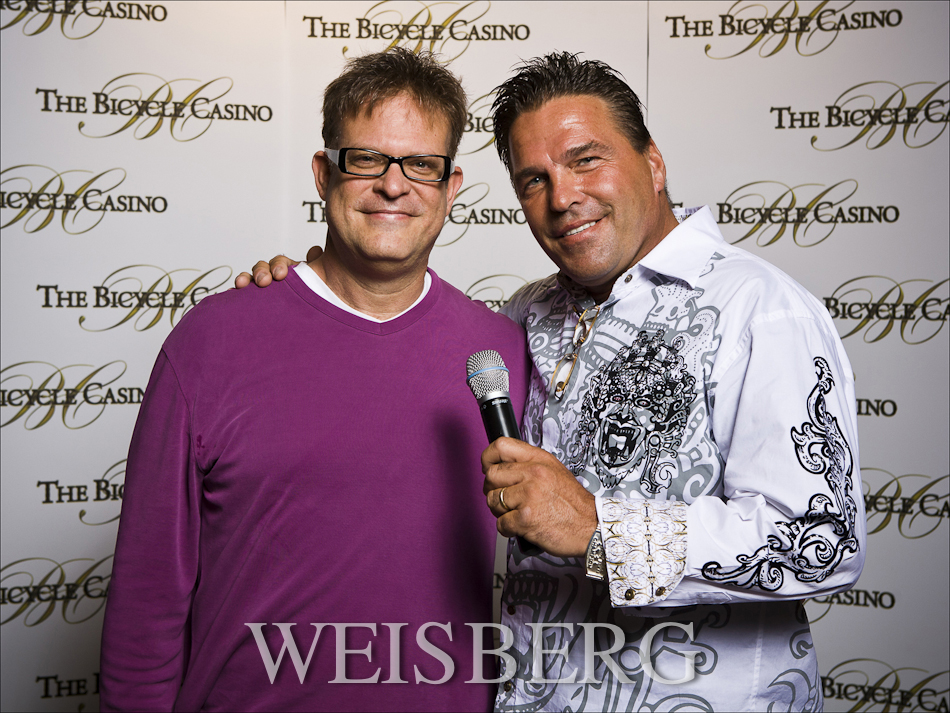 Director and Executive Producer for  a long list of T.V. programing  Lee Brownstein with George Kozel. 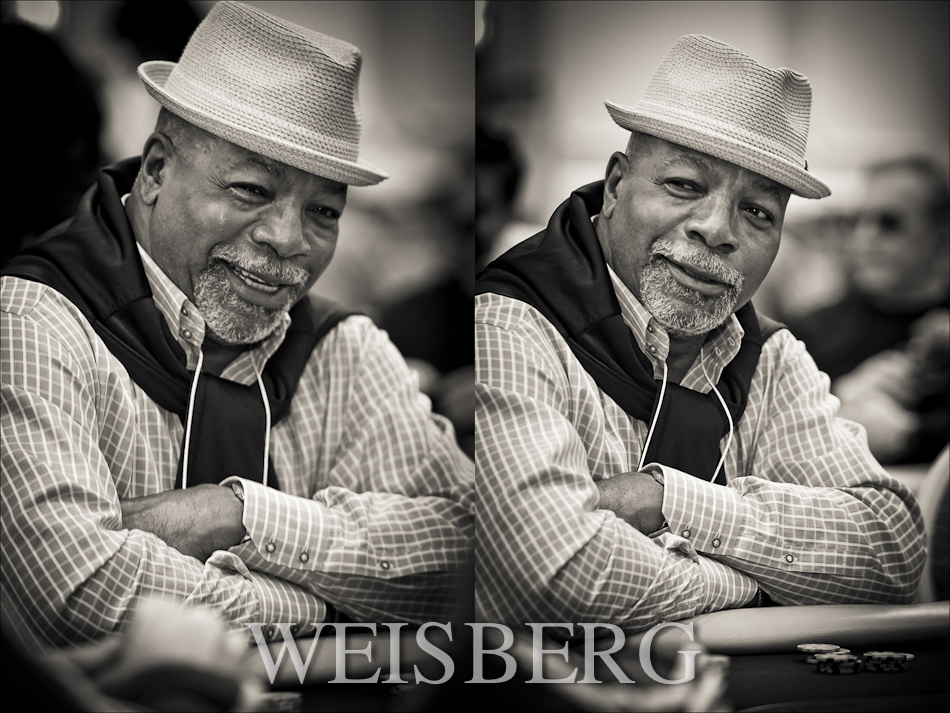 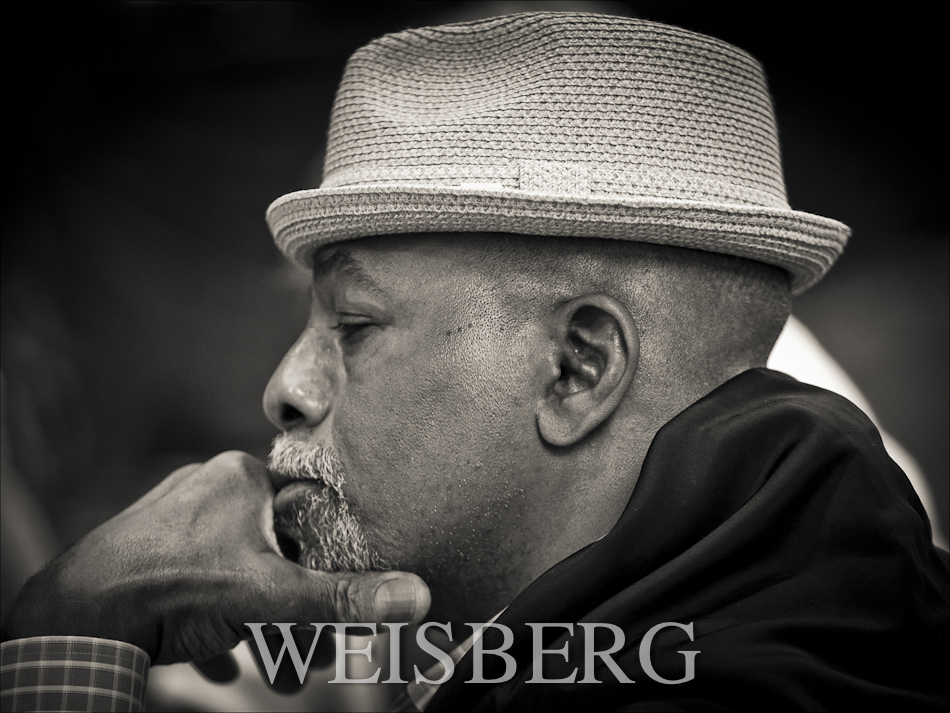 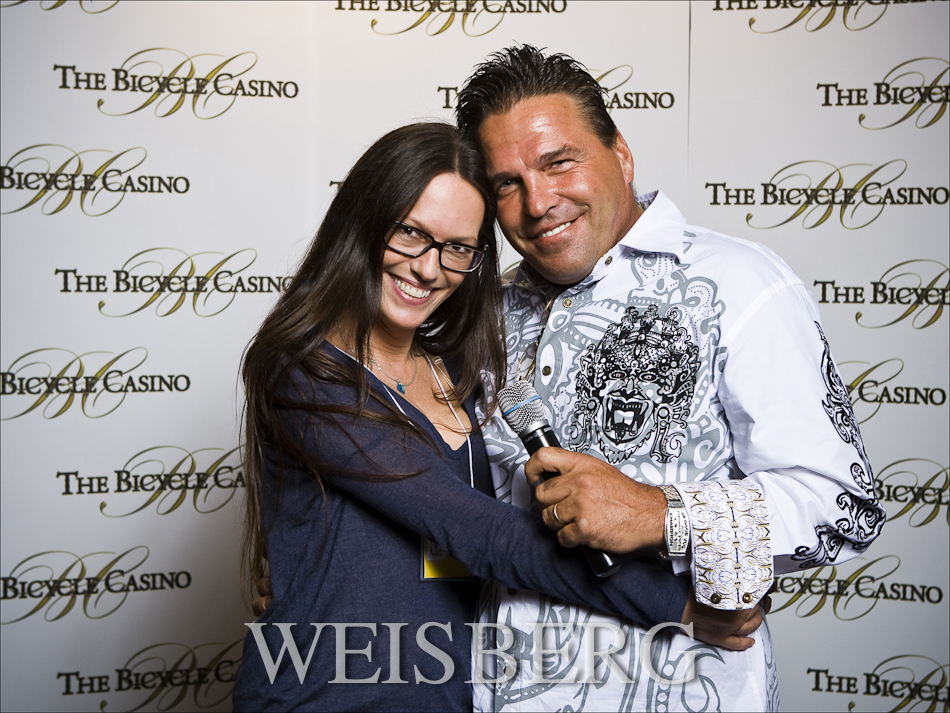 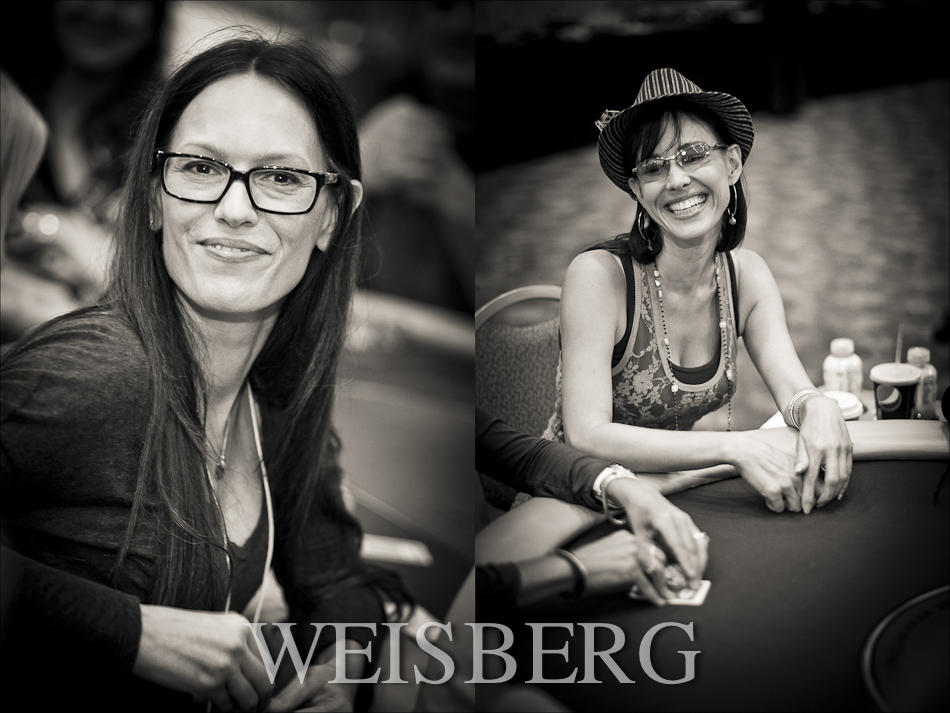 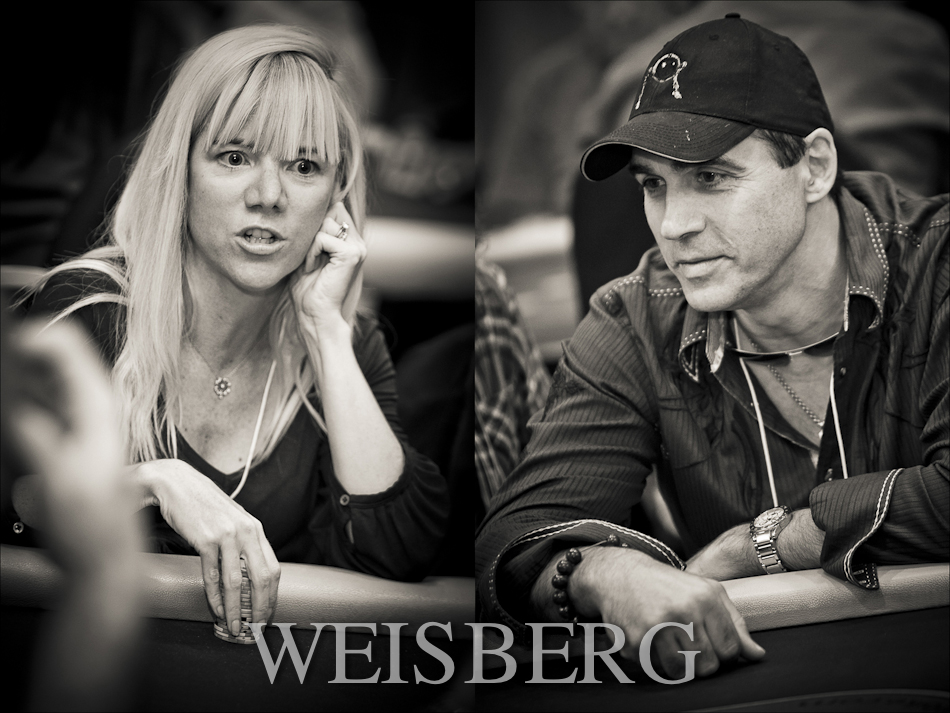 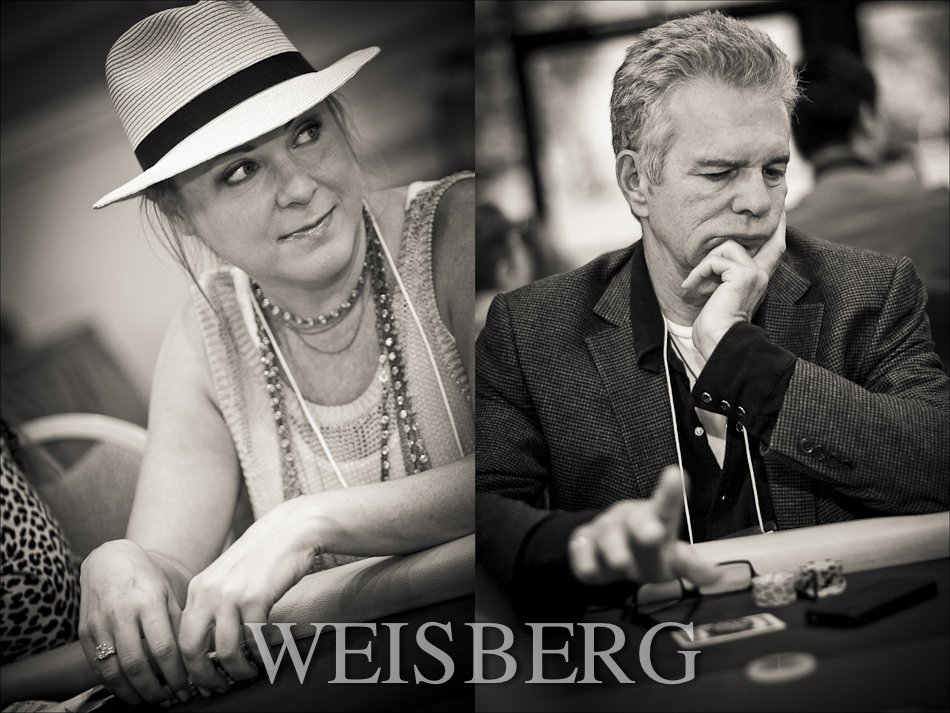 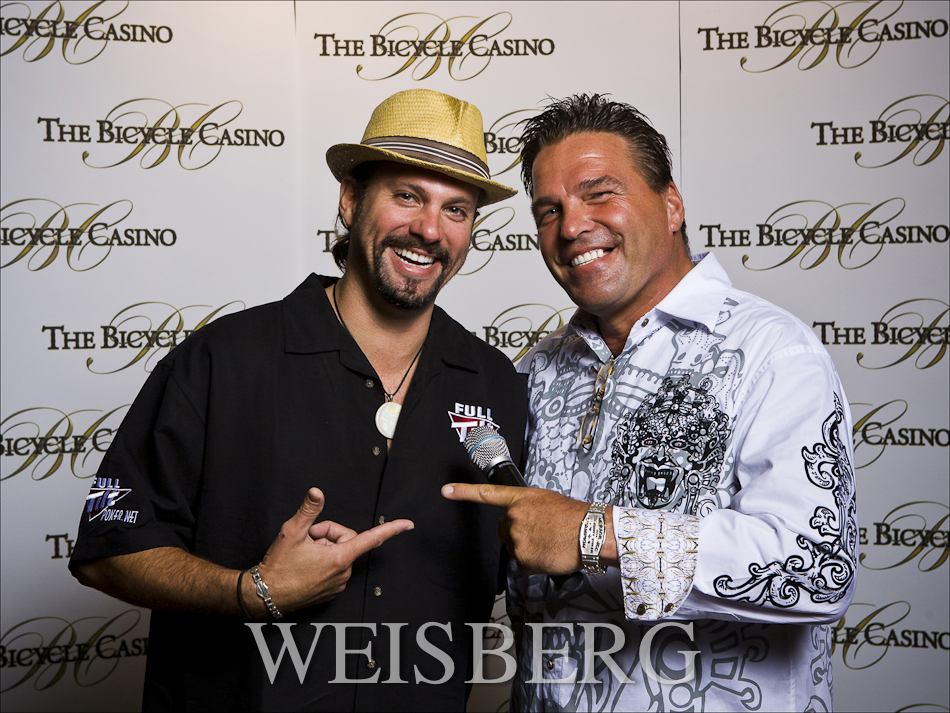 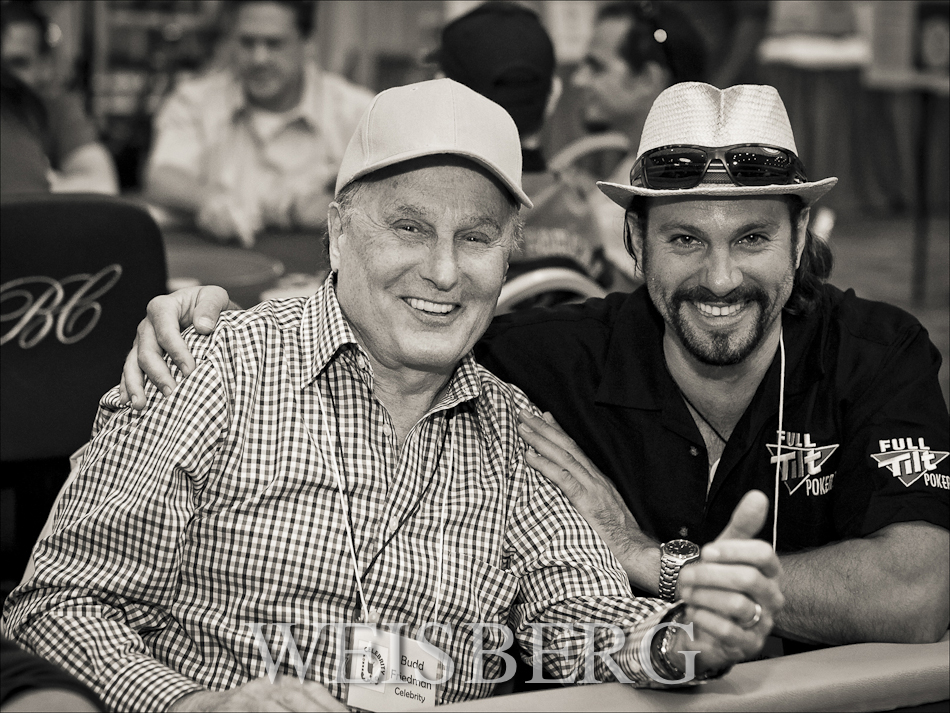 {above} Founder of the Improv Comedy Club Budd Freidman and Paulo Benedeti. 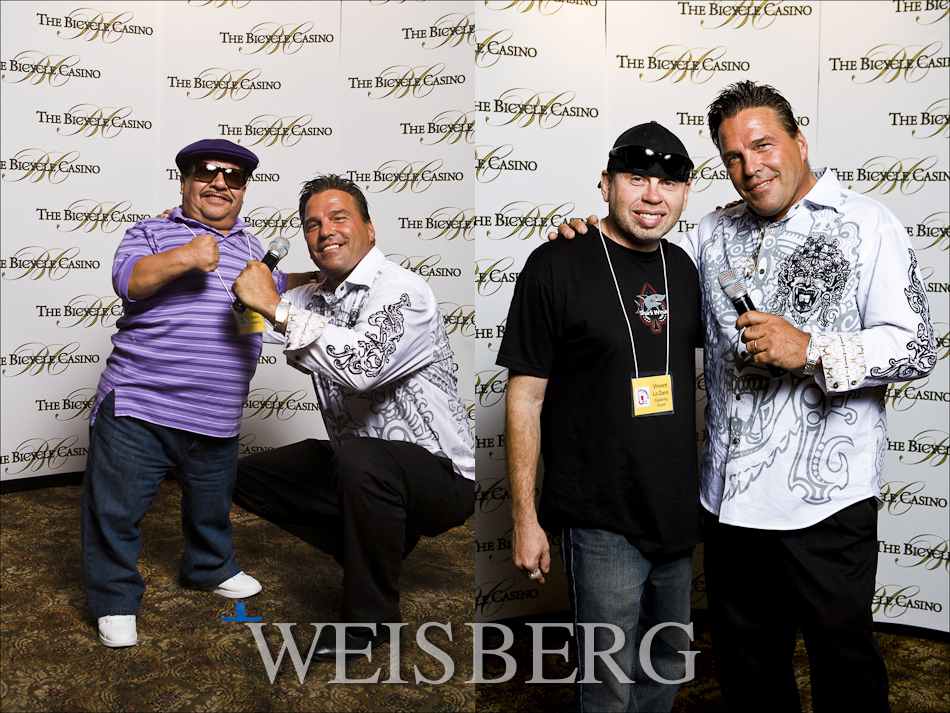 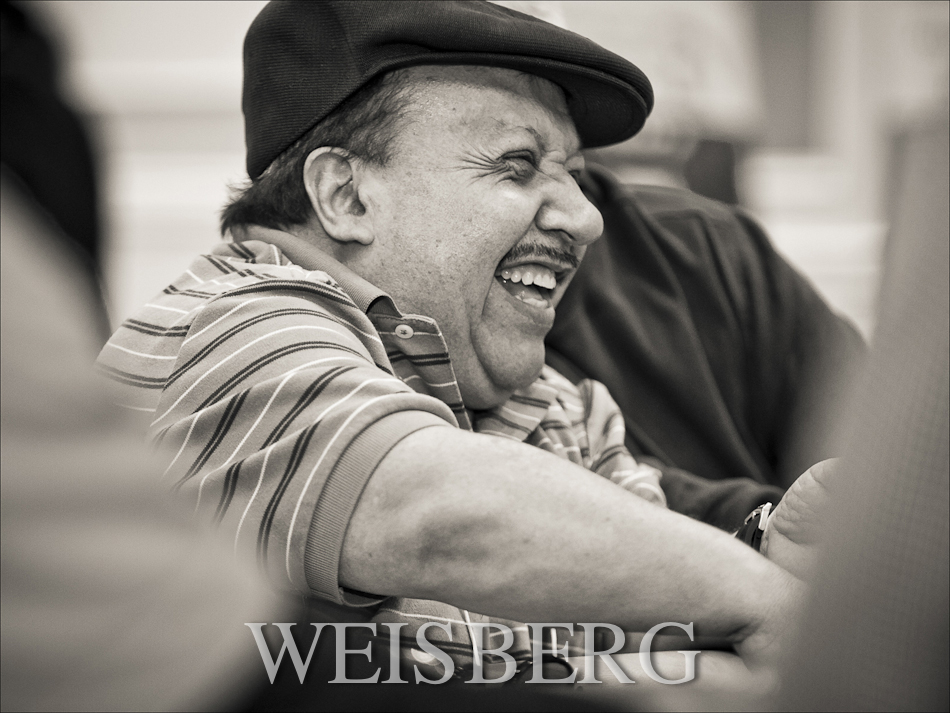 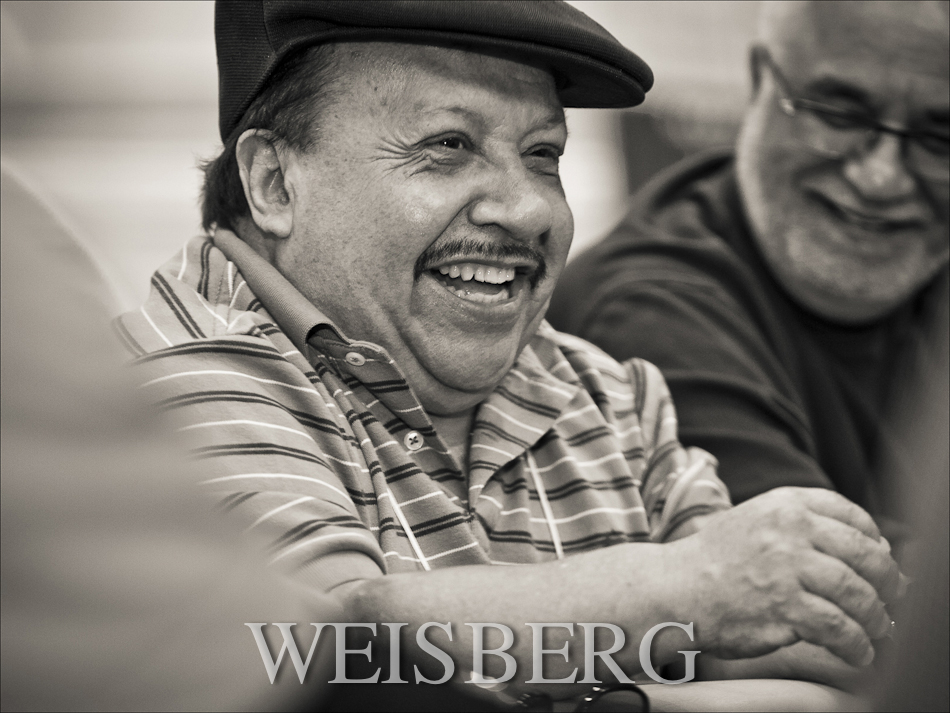 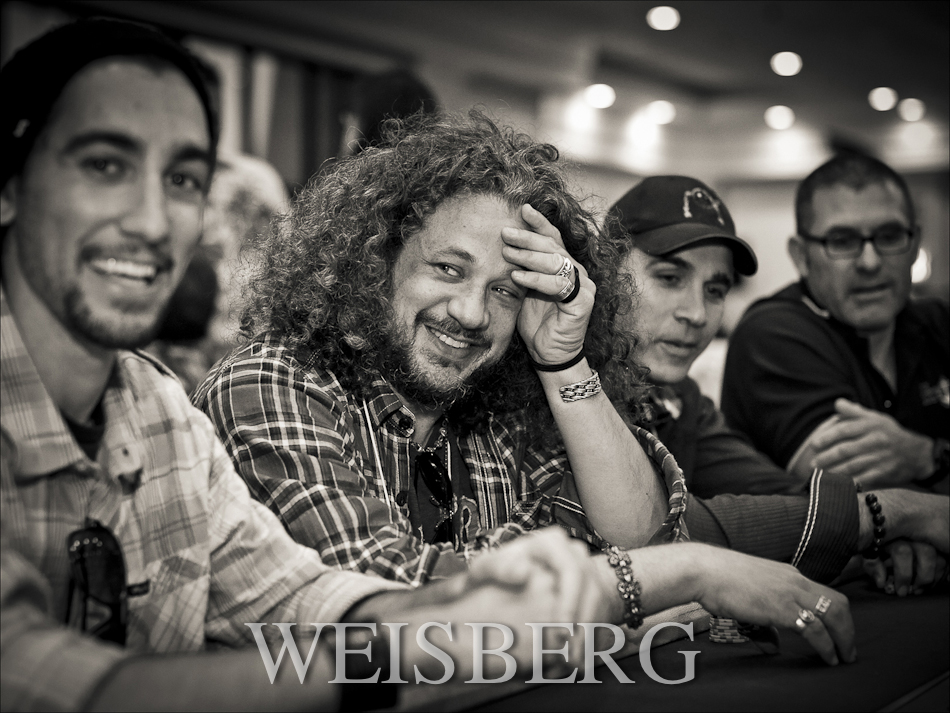 {above} Joe Reitman and Adrian Paul. 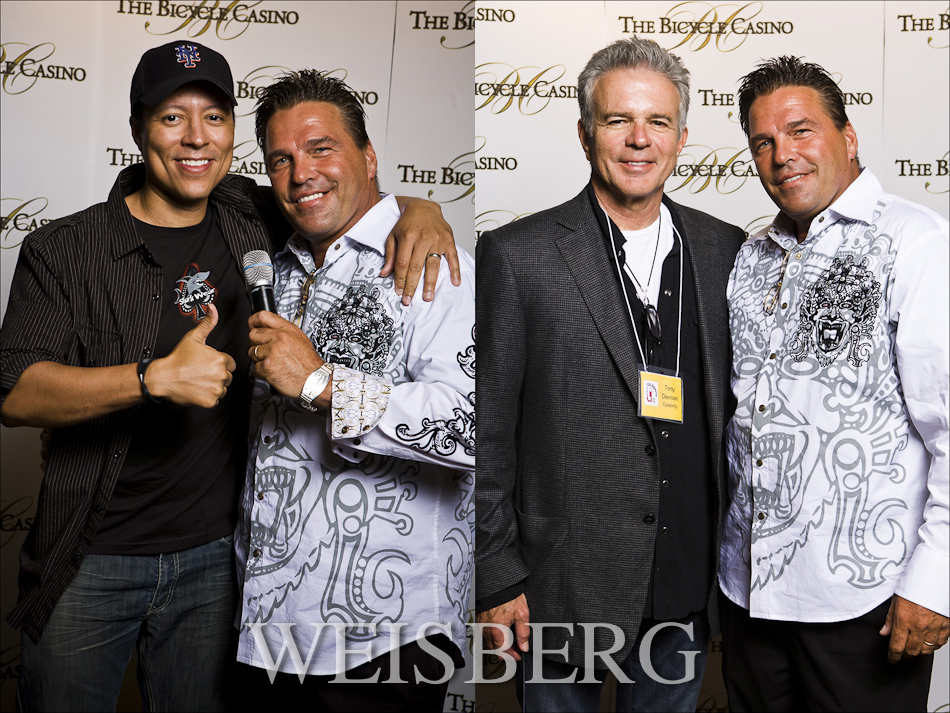 {above-left} Yancey Arias who’s been in more than 2 dozen tv and movie appearances, an ex- New Yorker who now lives in Los Angeles.
{above-right} I chatted it up and sipped coffee for a while with Tony Denison.  Super nice guy, ex-New Yorker, really down to earth. 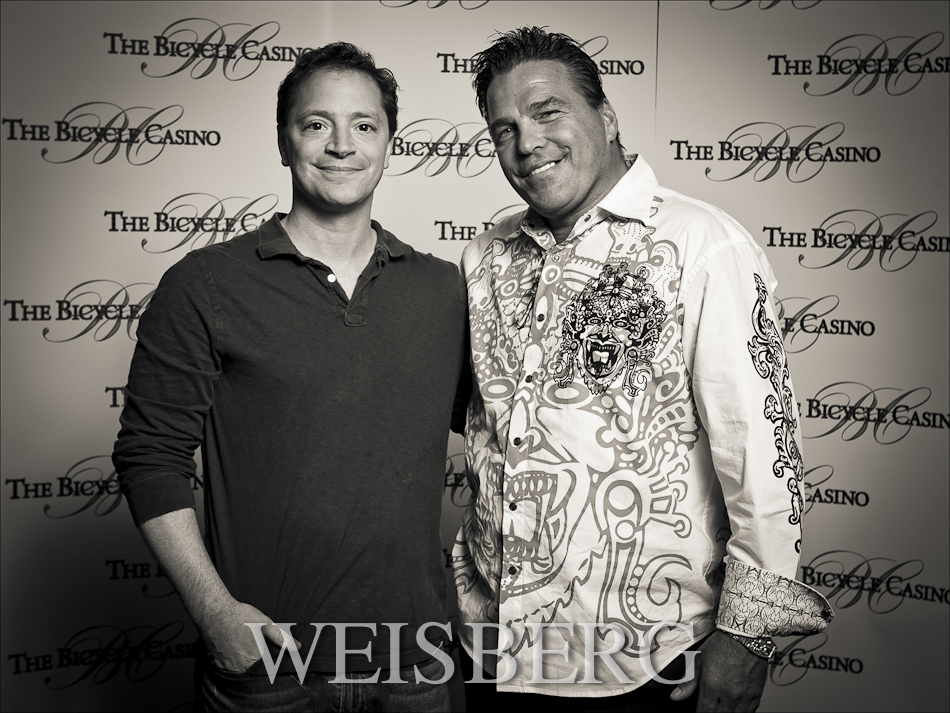 George Kozel with Actor Josh Malina
p.s.The lighting in the casino was a mix of daylight, tungsten and  fluorescent.  The color cast morphed into a yellowish, greenish blue soup.  I worked this without an assistant.  The the red carpet shots, I sued my ProPhoto AcuteB600R bounced into a 60″ umbrella, camera right.  Next time I’ll add another umbrella, a 40″ camera left.  Shot with a Canon 1D Mark III, a 24-70mm 2.8 L set.  ISO200  125th /sec. @F5.6.  Because I wanted to pic up some ambient, I purposely chose a slower shutter speed and a lower f-stop.  When I tested some shots, I noticed that if I was shooting at F11 @250th/sec. the background would go dark.  I knew that the most I’d have is 3-4 people per image and that my camera would be stabilized on a tripod for each static shot image and that at F5.6 my subjects faces would be tack sharp.  I really don’t mind the chiaroscuro and feel it gives the the subjects more depth in a very tight and shallow space.

6 Tips For Photographing a Celebrity Event

When photographing a celebrity event you have to be sensitive about a few things….

1} Always be smiling.  It really puts everyone at ease.  Be there first.  What I mean by this is anticipate what’s going to happen.  Be alert.
2}  Remeber who you are shooting for.  And make sure you get what your client wants/needs.  A smile and a thank you goes a long way.
3}   When you are shooting P.J. style, make sure that you are out of the way and at a comfortable distance.  I used a 70-200mm 2.8 L/IS, a  50mm 1.2 L and a 24-70mm 2.8 L.  Sometimes I bounced  a 580EX speed light, sometimes it was sporting  a Stofen.  I grabbed about 25% of the images with no flash and in post created B&W’s in Adobe® LR3.  My lens choice depended on what was happening at the table.  I didn’t want to distract the players or the celebs.  If you look professional, dress well, and act professional you’ll get a lot more leeway and people will just feel more comfortable around you.  More comfort = being able to get a bit closer without infringing on their space.
4}  Be a stalker.  What I mean be this is wait until something is happening rather than machine gun shooting, especially with a flash.  This can be very annoying.  Wait, get the shot, get out, and move on.  Go for expression!  I shoot until I feel I have gotten enough shots of people looking great and then move on.  You can always circle back if you feel you didn’t get what you needed the first time around.
5} Always be prepared, come with a plan and plenty of back up gear.
6} I always make a point of saying hello to security and chit-chatting with them for a few minutes.  You never know when you’ll need help with something at an event and security are well connected to the venue.   If they like you they’ll help you out.