Two weeks ago, Connie and I climbed into the 5 series and road tripped up north to Sequoia National Park and Kings Canyon.  I left behind my hefty camera body of choice, the Canon 1D Mark III and my L series lenes.  It felt liberating to travel light.  Instead I wanted to do a real world field test with the Fuji X100 and my new silver  Olympus OM-D E-M5, and three M43’s primes:  the Panasonic 20mm 1.7, Zuiko 45mm 1.8 and Zuiko 12mm f1.2 lenses and some spare batteries.  The Fuji only saw the light of day twice.  For three days I put the Oly and all three lenses through their paces.  Pressing them into glaring sun lit situations and low light situations.  All images below are photographed with the Oly and the aforementioned primes.   Images are captured RAW and tweaked in Lightroom 4.  Mostly all images are shot using the Auto ISO feature and Aperture Priority expect where noted.  I’ll share some of my preliminary thoughts on the camera & lenses. 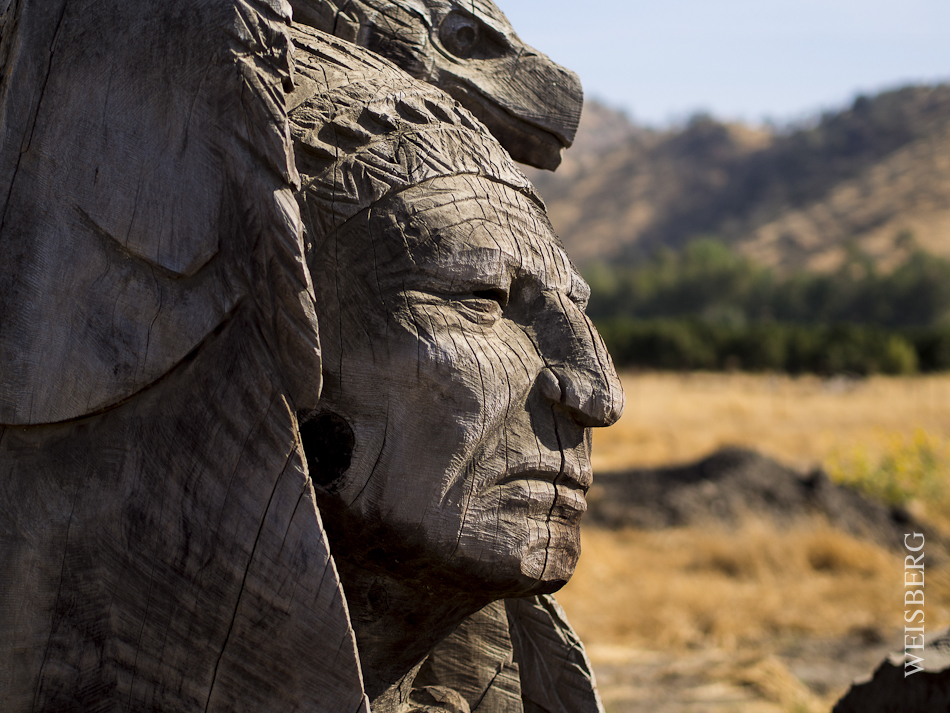 The giant trunk of a Sequoia.

Some Sequoias can grow to 300 feet tall. 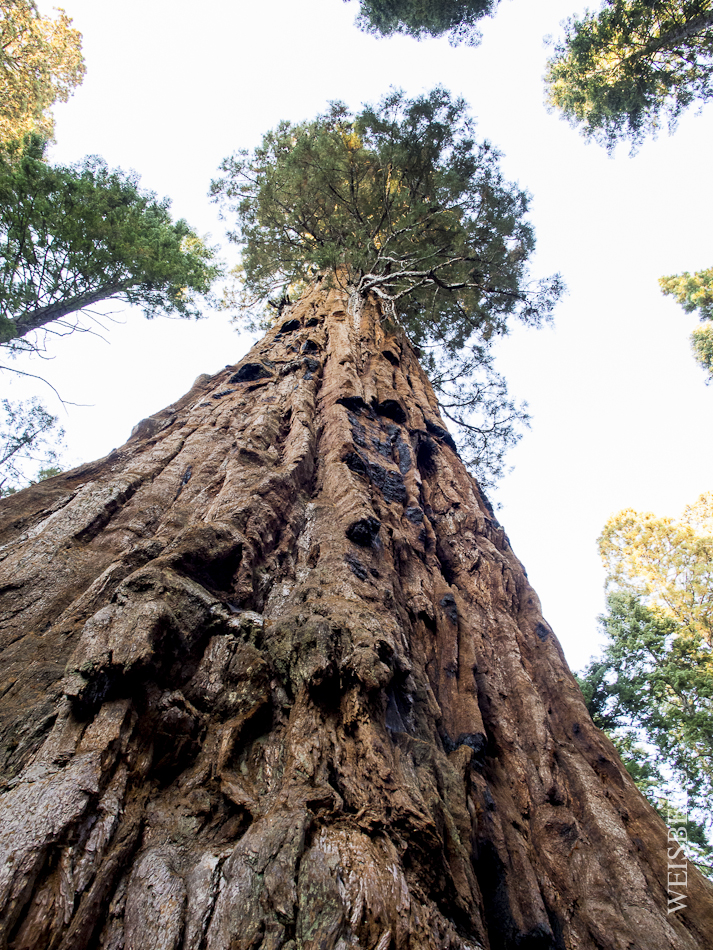 The huge trunk of a Sequoia, Sequoia National Park, photographed with an  Olympus OM-D E-M5 camera.  If you look closely at the top of the above image, you’ll be able to see some purple chromatic aberration on the upper green part of the cropped tree leaves. 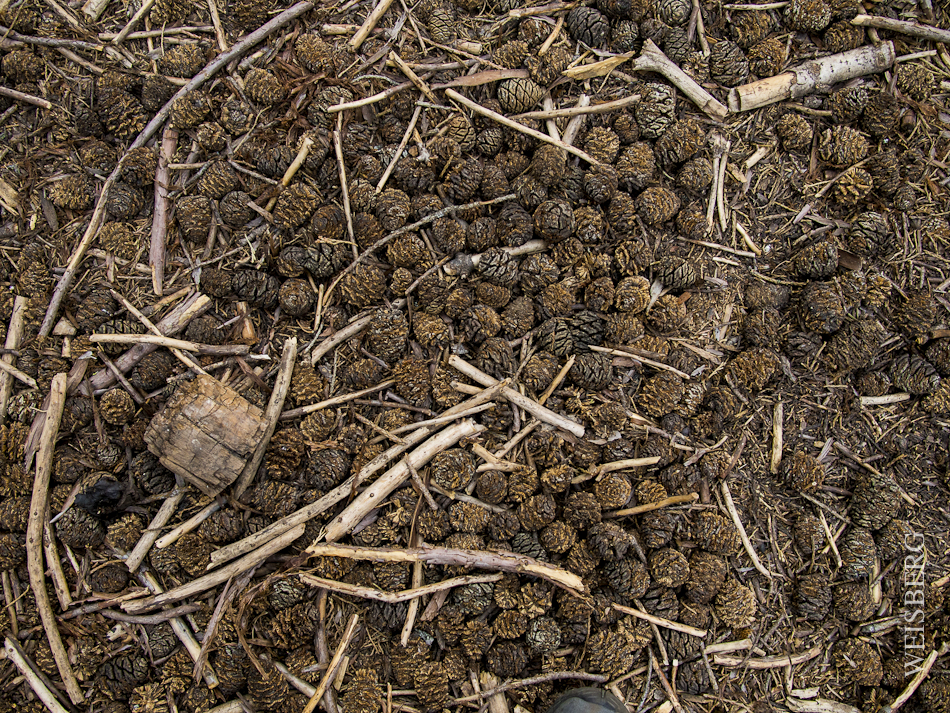 Over their lifetime, a Sequoia will produce over a million seeds. Only one seed will find it home in perfect soil conditions that allow it to reproduce.

The Sequoia has a protective bark, several inches thick to protect it from the ravages of fire.

Sequoias photographed in the fading light of the day.

The image of above was photographed with the ZD 12mm f1.2, 1/80th, f4.0, ISO 5000.  Being the first time I used the ZD 12mm I wasn’t really that familiar with the lens.  I remembered reading somewhere that the finely notched bezel was somehow able to snap in and out of position to range focus/manual focus, but completely forgot about that fact when I was autofocusing.    First I have to say that this was definitely my fault.  I couldn’t understand why the cameras focus point wasn’t lighting up to let me know that it had achieved autofocus.  As luck would have it did a fairly good job of achieving focus, but not tack sharp.  I quickly figured out that the focusing ring does snap in and out of position fairly easily.  The Issue:  The focusing ring snaps too easily in and out fo manual and autofocus position for my taste.  When changing lenses it is very easy to put the ZD 12mm into manual mode sheerly by accident.  What I would change:  I’d make some sort of easy locking mechanism to prevent this.  It’s pesky because when you are changing lenses, you have to remember to check whether or not the lens is set to manual focus.  And at $899 this should be a no-brainer.  The Fail:  The other thing that is annoying and a dumb lack of marketing sense IMO is not including the $89.99 Olympus -LH-48 Lens Hood for the $899 12mm f/2.0  that I sprung for.  Here I am spending $899 on a lens.  Just include a lens hood!  IMO that’s a major FAIL.

I found in very strong backlit conditions at about f8 the ZD 12mm showed some purple chromatic aberration.  However, it was a very quickly and perfectly cleaned up in Adobe Lightroom 4.

Wild ferns near Crescent Meadow. A gorgeous “loop” hike around a pristine meadow inside Sequoia National Park.  Above: This is what the ZD 12mm is capable of at 1/640th sec. f2.0, ISO 200.  Autofocus and tack sharp at 2.0.

We heard rustling in the bushes and slowly started, walking backward away from the bush. A young Black Bear stuck his head out to look at us and then crossed the road.  Because the campsites were closed, we were the only people in this area.  Is that why the gates were closed and yellow tape was up at the entrance?  Photographed with the   Olympus OM-D E-M5 and 45mm f1.8.

A minor note on the ZD45mm lens.  There is a lens ring that sits at the end of the barrel which covers the bayonet mount for the lens shade.  This piece came off once and fell to the ground.  It could have easily been lost.  When changing lenses it is easily loosened.  I’m contemplating just taking it off altogether so it doesn’t do a Houdini.  I hope that Olympus, in future renditions of this lens produces a better “locking” mechanism so that the ring doesn’t just fall off and disappear.

Lucky Shot. Quick reflexes and the rapid auto focus of the  Olympus OM-D E-M5 allowed me to capture this dear on the run. Dorst campgrounds, Sequoia National Forest. In-camera blur, no photoshop was used.  Connie got totally freaked out by all the wild things. Guess she’s a not a nature girl after all.  ZD 45mm, 1/100th sec at f 7.1, ISO 1250.

The camera is very well built and feels quite professionally grade.  All the buttons and there are lots of them are easy to use with a bit of practice.  Many have mentioned that they didn’t like the placement of the on-off switch.  Personally, I think it is in the perfect place.  But then again I’m left-handed.  Many of the buttons are not intuitive and it took a solid read of the manual and a bit of Googling and sitting and playing with the menu system to understand how to set up the Oly to my liking.

That said the camera is extremely responsive and easy to use one you understand the operational nomenclature.  For instance, the Super Control Panel is not easy to access at first.  But this will definitely help you understand it better.

The Problem:  The one thing I’ve noticed, several times, is that it is very, very, easy when in the Super Control Panel, to accidentally click on say ISO and tweak it up to ISO 20,000 without even knowing it.  Or accidentally invoke the Face Recognition feature while flipping through the myriad of camera settings.   Which I’ve done both of.  The Fix:  It would be nice to have a locking item on the menu which allows the Super Control Panel to lock so that a shooter’s camera set up modes cannot be accidentally changed.  Furthermore, it would also be great to be able to download all your camera settings onto an SD card should you have to reset the camera.

Overlook from Sequoia National Forest to the South.

I’m a sucker for clouds.

Gorgeous mighty Sequoia Tree bark. Photographed with the ZD 12mm.  Love the fact that the 12mm minimal focus distance is 7.9″

The great Sequoia trunk show. One of my favorite photographs fromt our trip. Crescent Meadow, Sequoia Notional Forest, just before sunset. Photographed with the   Olympus OM-D E-M5 and ZD 45mm f1.8. The 45mm lens is tack sharp wide open at 1.8.

Going through my images, I’m noticing that my 20mm Panny was my least used prime.  My 12mm and 45mm were pressed into service the most.

Close up of moss in Sequoia National Forest.

The trunk of a great Sequoia ravaged by fire.

Portrait of a Sequoia, photographed through the trees on the Southern part of the Meadow loop trail. Photographed with the   Olympus OM-D E-M5 and ZD45mm.

Just loved this round bushy cactus in Kings Canyon and their sage brush green color against the rusted iron rock facade.

In time i’m pretty sure that I’ll sell my 20mm Panny for a sharper lens.  The lens is fine but doesn’t have any sort of special signature to it.

A lone Pine tree sits atop a cliff in Kings Canyon. Photographed with the   Olympus OM-D E-M5 and 45mm f1.8.

After shooting with the  Olympus O-MD E-M5 for three days and about a thousand shots, I’m thoroughly delighted with it.  Excellent body feel, and IQ.  I purchase a few extra batteries.  And found that I ran through about 2.5 fully charged batteries after a full day of shooting about 7 hours.  The camera is a pleasure to work with.   The auto focus is quick and precise.  I’m using Lexar 32GB SDHC  Class 10 SD cards.  Their write speeds are blazing fast even in RAW with the Oly.  I’ve never waited on the buffer to write data to the cards.  Write speed is instantaneous and there didn’t seem to be a bit of difference whether shooting Jpeg or RAW images as far as write speed was concerned.

Changing lenes often outdoors did not create a sensor dust issue.  But that reminds me, I’ll have to scope the sensor tonight.

Some users have complained about the low humming noise that the 5-Axis Image Stabilisation produces.  Honestly I didn’t even notice it until I was in the quiet of the woods.  It really doesn’t bother me at all.  And heck, it provides me with sharper images, so what’s to worry about?

The only niggle i have about the camera is the gamut of the excellent, true to color, and high resolution, tiltable LCD.  I found that a handful of my sky and cloud images looked horribly posterized.  Not horizontally or vertically, rather they banded in an arcing fashion (from left to right) as if they were strangely pixilated.  At first I thought it was a lens defect.   However once the images were imported into Adobe Lightroom 4, I was assured that it was indeed the short coming of the LCD gamut.  I believe the color was somehow out of gamut for the LCD to display them properly.

A trial download version of Adobe Lightroom 4  was necessary because my current version of Photomechanic doesn’t support RAW files for the X100 or the O Olympus OM-D E-M5.  LR4 is totally worth the upgrade from LR3, and after my trial of LR4 expires I’ll will be purchasing the upgrade for $99.  LR4 offers more control of the shadows and highlights, and for that reason its worth the upgrade price.

The Oly OM-D E-M5 is It is not a replacement for a DSLR by any means.  It was evident pretty quickly that the IQ at higher ISO captures were not anywhere close to the my Canon Mark III.  Higher ISO captures on the Oly are a bit noisy after about ISO 4000 That being said I’ll be going to Paris for two weeks and will bring my X100 and Oly (which’ll be the prime shooting camera).   The beautiful thing about the x100 the Oly and three primes, 6 batteries (three for each body) is that they all fit in a small shoulder bag.  The Mark III, which will most likely spend the majority of the time in the Paris flat will take the jump across the pond too.   Should Olympus come out with a full frame sensor like the Sony RX1 that would be a big game changer.  As a travel camera kit, my shoulder bag set up is perfect for me.  My feet and back love this feather weight camera system.  For professional shoots, I’ll stick to my pro Canon gear.

p.s.  In the future,  I’ll be second shooting a wedding with just my x100 and Oly5 and will share those images with you.