Click to see Part 1, Part 2 and Part 3.
{All photographs taken with the Canon 1DMarkIII | Processed in Adobe Lightroom 4 }
This is the final episode of blog posts on the Jewish World War II Veterans I photographed for the 75th Jubilee of the Jewish War Veterans in Culver City, Los Angeles. To memorialize these heroes I set up a on location portable studio. The studio consisted of a 3’x4′ Chimera soft box, a 7 foot Westcott silver umbrella with diffuser on the front, both powered by ProPhoto heads and triggered by my trusty Pocket Wizard Plus III’s. It was important to me to make dignified portraits that showed each World War II veteran at their best. There is nothing like a grey backdrop and gorgeous, flattering studio light to do the job. I’m not sure where these will end up but I’m committed to it being part of a larger project which will also include Holocaust survivors of which I’ve only photographed a few. So if you are reading this and know of a Holocaust survivor who would like to be photographed and you’d like to put me in touch with them I’d be honored to have a conversation with them. Ultimately I’d like these to be shown large and in a gallery to somehow benefit a Jewish organization or privately fund a project for one or more veterans and survivors.
Below is a picture of Bea. One hundred and four years old. Although she is not quite sure, maybe one hundred and five. What the heck, I’d lose count too. She can still get around with a cane. But I held out my arm like a gentleman to escort her my on location studio. She is warm hearted, witty, has a warm smile, warm heart and warm hands. She is reported to be the oldest living female veteran in California and possibly the world. 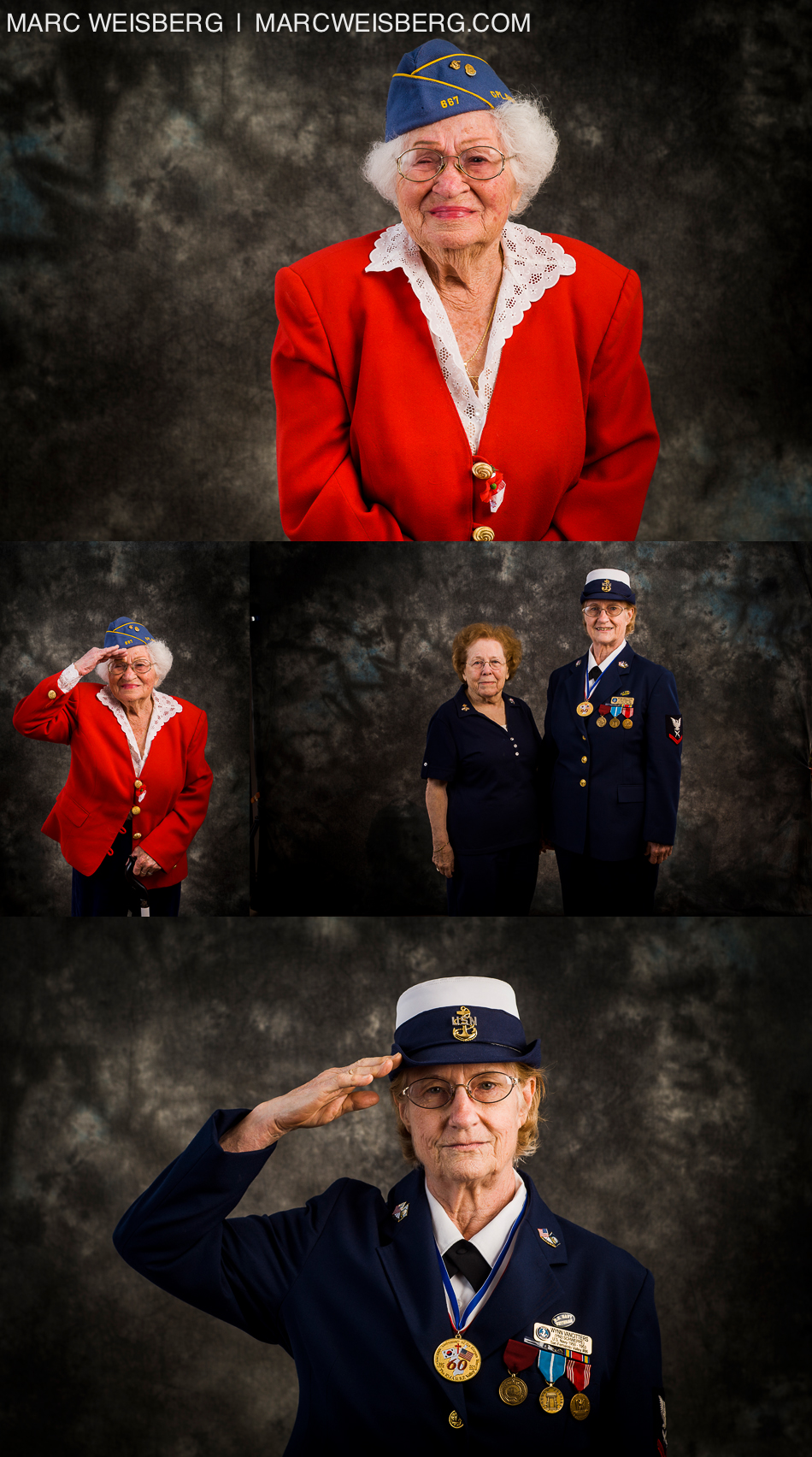 Below: A World War II Jewish veteran Mr. Zaid and his daughter Lisa Zaid, who works at the Museum of Tolerance in LA as a Project Coordinator – Marketing and practices Cross-Fit. Below the Zaid’s, a husband and wife married for over 60 years! 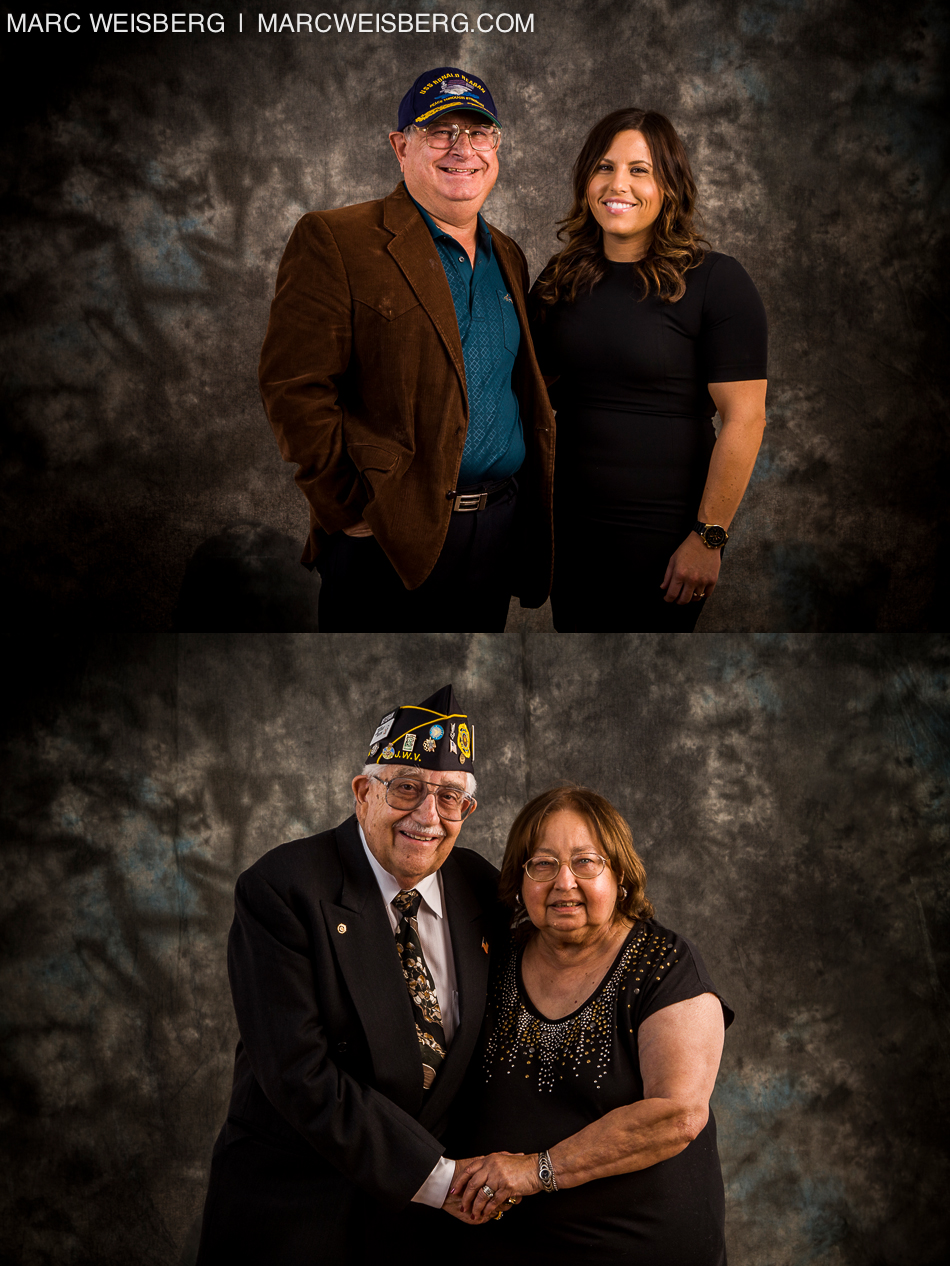 Below: Korean Consulate General, the Honorable Yeon Sung Shin, with Mr. Alan Hoffman and again with my wife Connie. 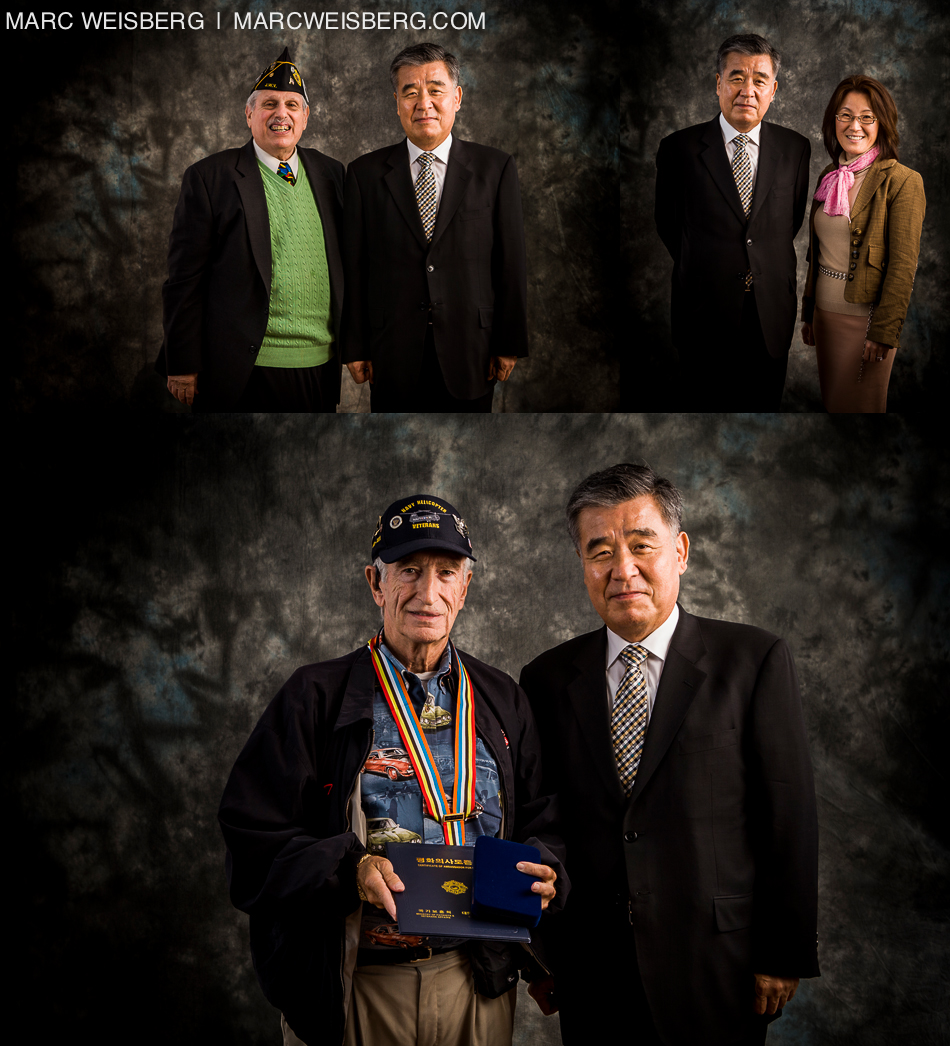 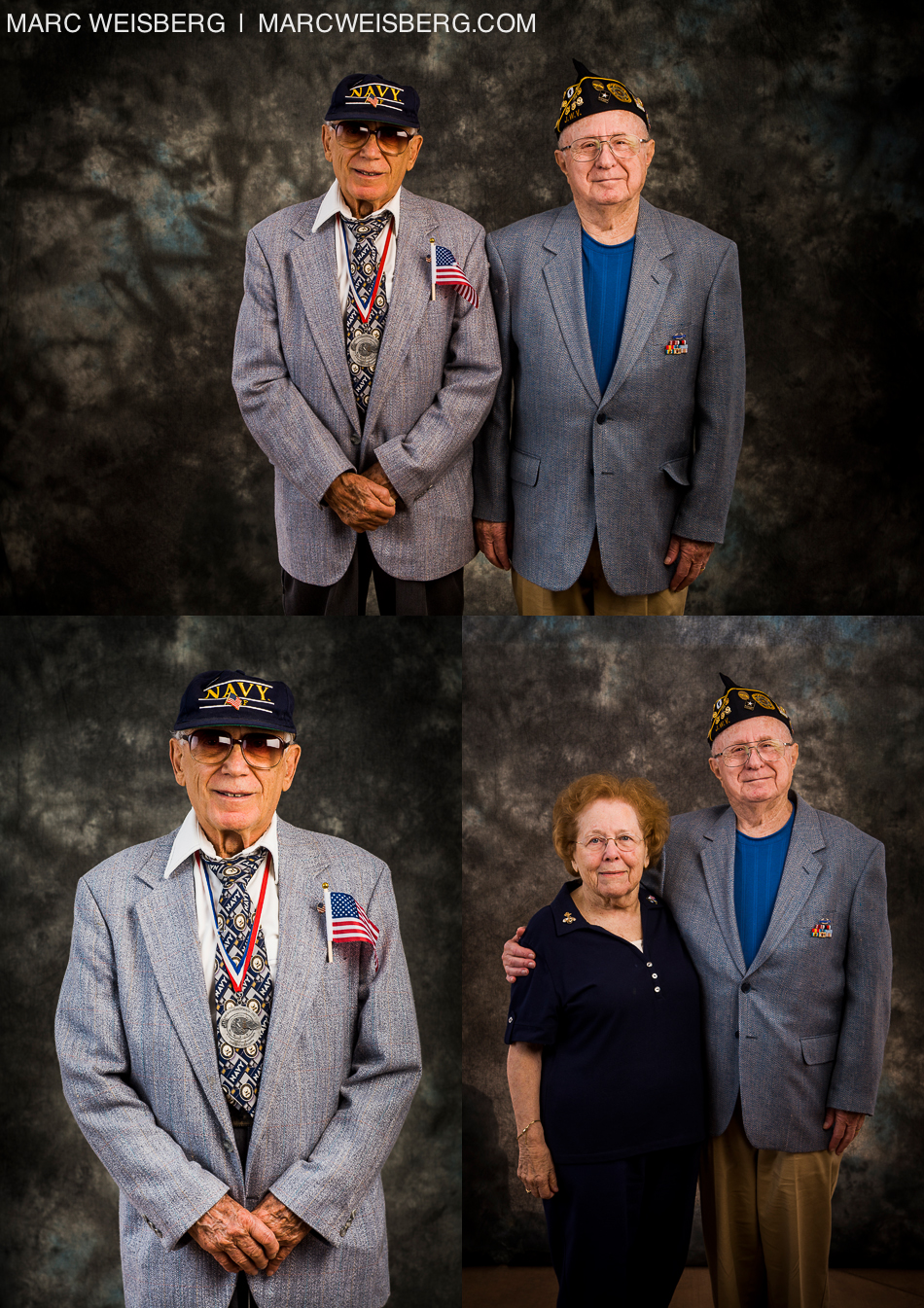 Below top left: Colonel Maxwell S. Colon, Army (Ret.), NYC Correction Captain (Ret.) and Penologist. Col. Colon and I had a brief talk. I was honored to receive a rare pin from him in recognition of my service at their 75th Jubilee. The pin he gave me is from one of the only Jewish synagogues on and military base. I was beyond honored to receive this gift from him and it totally made my day. Below: Col. Colon is Mr. Alan Miliefsky a retired Navy man who put me in touch with the Jewish War Veterans group. I met Mr. Mileifsky at a Jewish function in Irvine and through conversation let him know that I was interested in photographing WWII and Holocaust survivors. He passed my card on to Mr. Hoffman. Mr. Miliefsky is a happy soul enjoying his retirement and soon to be married. 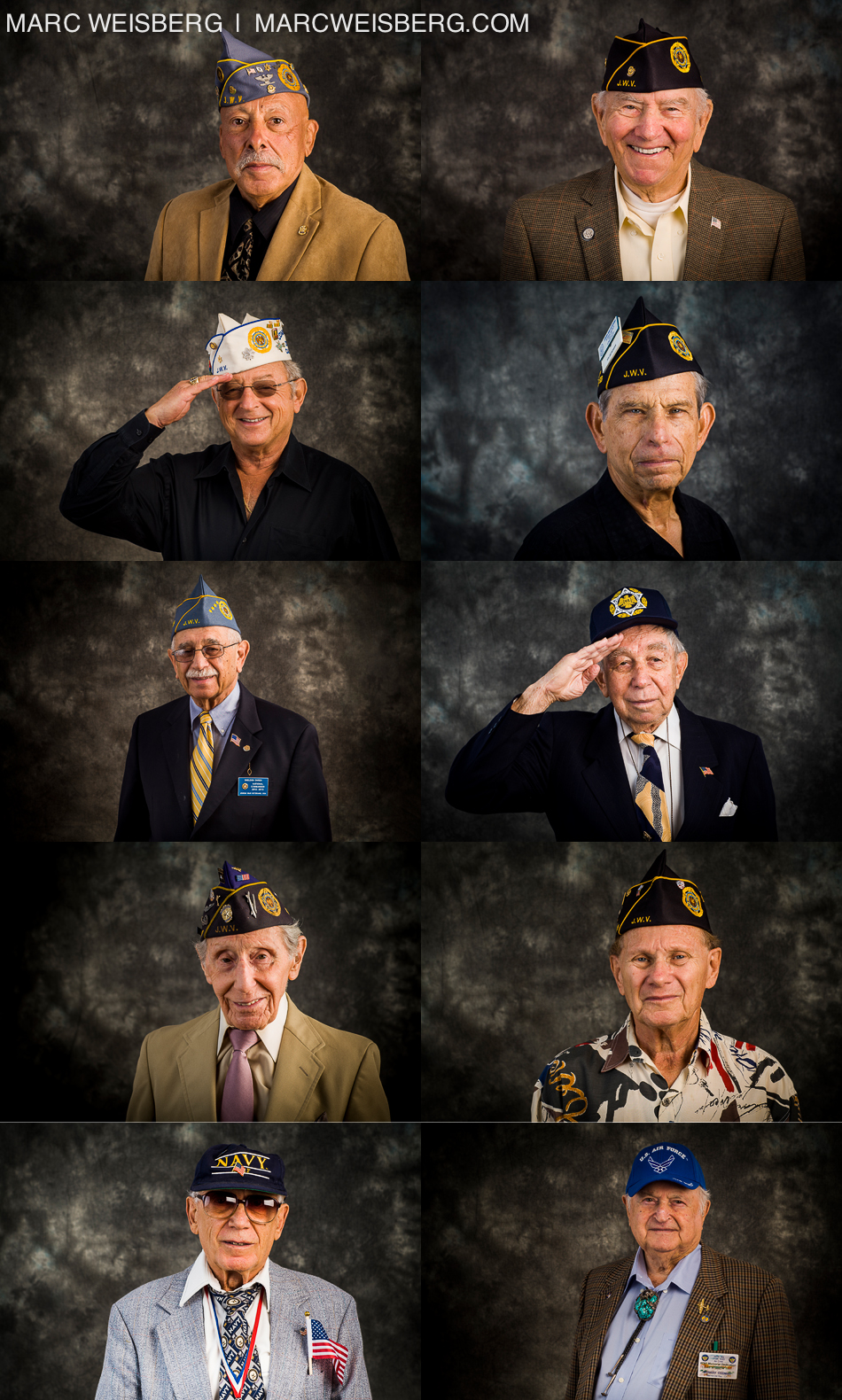